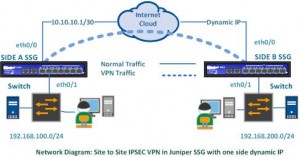 The IPSEC VPN Phase-I and Phase-II proposal parameters used here are manually defined so that any parameters can be defined easily by studying the given scenario here. The table shows Phase-I and Phase-II VPN parameters that must be same on both side of VPN configured devices and some other parameters are locally significant and these must be unique to the existing values on local SSG Device configuration.

I am going to show both way of configuring the SSG with CLI and WEB step by step below. Configuring SSG device by WEB is far easy than CLI  Procedure for the users who are less familiar to the NetscreenOS CLI. Though  I most like to prefer the CLI every time.

Firstly, I am going to configure using CLI procedure for both location  in part 1 than I will show the WEB procedure as well in part 2.

Side A SSG configuration

Side A SSG has static IP to the interface facing internet/WAN. All the configuration steps here are based on the VPN parameters listed in above table. I have configured the VPN tunnel 1 interface in SSG device. The tunnel interface is bonded to Trust zone. you can bind it in different zone than trust zone as your desire so that I could not add more policies for the user if there is already a policy in basic configurations. The destination network is routed  with the tunnel 1 interface to reach another side SSG through the internet cloud which is bounded to the Phase-II VPN. The traffic passing through in internet cloud becomes encrypted to protect the unauthorized access of data.

CLI Procedure: I most like to prefer the way to configure the Juniper device. I am  going to configure as blow.

Side B SSG Configuration

Side B SSG has dynamic IP to the interface facing internet/WAN. It is configured as following using the VPN parameters listed in above table. All of the configuration is similar to the side A SSG device except the Phase-I gateway configuration.

Hi !
This is Ghan Shyam from Kathmandu, Nepal. I work as freelancer  at world’s top freelancing site Upwork apart from my professional job.